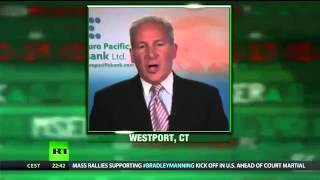 The world’s most powerful monetary manipulator, Chairman Ben Bernanke, told Princeton grads over the weekend to “Call your Mom and Dad, once in a while.” He also said “If your uniform isn’t dirty, you haven’t been in the game.” Well, after four and a half years of near-zero-interest-rate-policy — aka money printing — we’re afraid to see just how dirty the Chairman’s uniform is at this point. But don’t worry. After channeling poet Robert Burns and Forrest Gump, the Chairman closed — in Truman-esque fashion: “Give ’em hell.” And that’s about what we can expect once the Fed “tapers” away the punch bowl. Perianne talks about the Fed and gold with Peter Schiff. And Prime Interest Producer, Justine Underhill presents a chart to explain just exactly what the Fed has been doing vis a vis QE.

Also, in the US, the big banks have had to submit “living wills” to regulators — basically, a blueprint for their wind-down should they become insolvent — or, more insolvent, we guess. But the central bank of central banks, which is the Bank for International Settlements, just came out with its own plan for how to deal with too-big-to-fail. It’s “simple,” they say. Just let the creditors and depositors take losses — a la Cyprus — and force the creditors to recapitalize a new banking entity. This presupposes the creditors have the money to do this. After all, if a too-big-to-fail bank goes down, we’re assuming all is not well in the land of Oz.